Life in the Raw - Cast and Crew 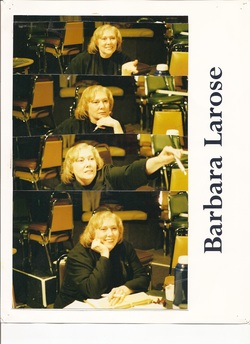 Barbara Larose studied theatre at Concordia University in her home town of Montreal and has worked as an actor, director, dramaturge, and acting coach for many years.  Barbara has directed the critically acclaimed Toronto Fringe productions of Edward Albee's The American Dream for Fireplay Productions, and Rick Jones' Millennium Madness Sale! for Thick and Thin Theatre.  Also at Fringe she directed the box office hit Franca Miraglia's Life on a Diet for By the Word Productions and the wildly funny Guests Who Harangue: Two Plays by Durang for Svengali Productions.
Some of Barbara's other directing credits include Edward Albee's A Delicate Balance and Who's Afraid of Virginia Woolf; the critical hit, Michel Tremblay's The Real World?, Oscar Wilde's Lady Windermere's Fan, The Memory of Water by Shelagh Stephenson, Margaret Edison's Wit, and most recently Tom Stoppard's The Real Inspector Hound and After Magritte, all at the Alumnae Theatre.

She has also indulged her interest in the development of new works and has directed Really Great Hats, The Poet's Wife, Time and Longings, and The Meeting in successive New Ideas Festivals; Cathy McKim's Being Cecil Graham for NIF and the 'Slaw Festival, and Yael Sirlin-Rush's Nice to Meet You at No Sweethearts Required Festival

Toronto native Rick Jones has had a long and varied career in the performing arts.  Originally a musical theatre performer, he has worked across the country in shows such as A Chorus Line, 42nd Street, Oklahoma, and Kiss Me Kate.  In the world of dramatic theatre, he has performed in shows such as The Real Inspector Hound, Wit, The Odd Couple, and Of Mice and Men, and a variety of shows at the Alumnae Theatre's New Ideas Festival.  Previous Toronto Fringe appearances were in Giants Without Footprints, and Life on a Diet.  His 1999 Toronto Fringe play Millennium Madness Sale! received 4Ns from Now Magazine, where he was described as "Kurt Weill comes to Toronto".  He works regularly as a sound designer, composer, and choreographer at the Alumnae Theatre in Toronto, and has also composed for several short films.  Jones is a favourite at the Toronto-area film schools, having acted in over 30 shorts in cooperation with Ryerson and York Universities, Sheridan and Humber Colleges, and many of these films have found a home in Canadian Filmmakers, World Comedy, After Dark, Ion, and Cannes Film Festivals.  Most recently he appeared in the Discovery Channel series Mayday, where he had the opportunity to crash an Airbus.  Jones holds a degree in Dance from York University, and a diploma in Medical Laboratory Technology from the Michener Institute, which he uses on a part time basis to support his unfortunate addiction to eating. 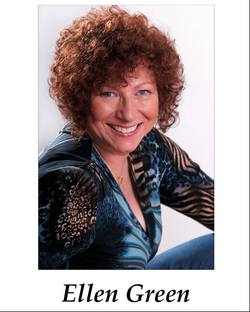 Ellen Green studied English and Drama and Film at York University and U of T.  It was at York that she spent most of her undergrad years as a member of the York University Players taking on five lead roles such as Mama Ubu in Alfred Jarry's Ubu Roi, and Lady Hurf in Jean Anouihl's Thieves Carnival.  While teaching at Bathurst Heights, Unionville High School for the Arts, and Vaughn Secondary School, she took acting classes at Leah Poslin's Theatre School.  Also during her teaching career she directed many productions including The Mikado, Lovers and Other Strangers, Arsenic and Old Lace, The Rothschild's Twelfth Night, Little Shop of Horrors, Into the Woods, Alice in Wonderland, Anything Goes, Noises Off, Brighton Beach Memoirs, Harvey, and 7 Stories.  Finding a home at the Alumnae Theatre, Ellen has worked happily with Barbara Larose as ASM, AD, co-Director, and Producer.  This original play is our second Fringe project together. 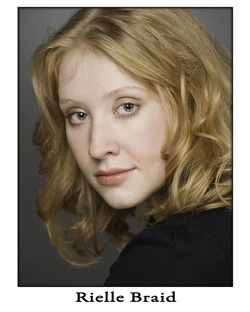 Rielle Braid recently moved from Vancouver to Toronto after a successful tour of Atomic Vaudeville's Ride the Cyclone.  She is thrilled to become a part of the Toronto theatre community.  She holds a BFA from the University of Victoria, where she studied acting at the Phoenix Theatre.  After graduation in 2009, Rielle wrote and produced BOYGIRL for the Victoria Fringe Festival.
Rielle has been fortunate to work with such companies as Theatre Calgary, Blue Bridge Repertory, and Atomic Vaudeville.  She has also toured Cyclone in cities like Whitehorse, Victoria, Vancouver, and Toronto.  Rielle is also starting up a monthly column at the LRMC 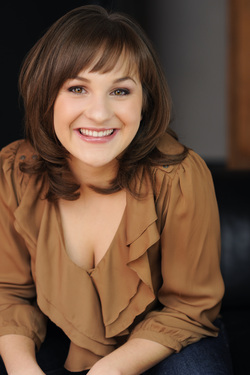 Kaitlin Lane is extremely grateful to be playing Nellie in Life in the Raw.  She recently moved to Toronto after growing up in White Rock, B.C., and completing her Diploma in Performing Arts at the Canadian College of Performing Arts in 2009.  Her favourite credits include Olive Ostovsky in The 25th Annual Putnam County Spelling Bee, Judy in A Chous Line, Dulcie in The Boyfriend, and Puck in A Midsummer's Night Dream.  Kaitlin recently had the priviledge of sharing the stage with Peter Karrie as a guest artist on his recent tour titled A Phanton Returns.  You can also catch her this summer in StageWorks Toronto's production of Urinetown, and this coming winter in The Yellowpoint Christmas Spectacular.  Thanks to Mom and Dad for their unconditional support. 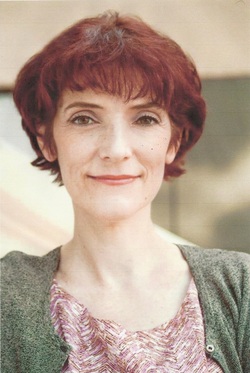 Denise Norman is an actor/singer from Toronto.  This will be her 14th production, either as performer or director, in the Toronto Fringe Festival.  She may be familiar from singing with the Newfoundland a capella trio Daughters of the Rock as well as The MadriGals, singing Rennaissance and classical music.  Denise will also be performing in Dean Burry's one person show Sweetheart (the Mary Pickford Story) at the Highland Summer Festival in Haliburton later in July.  Having been a teacher at both the Randolph Academy and U of T/Sheridan and a performer for quite some time, she credits her joy of new works and classical scripts to the wonderful people she has had the good fortune to work with, and the diverstiy of those styles and experiences.  Past performances include Isabella from Measure for Measure (after having worked with Richard Pochinko at the TRC); the title character in The Vile Governess (directed by Sue Minor); and Katisha in The Mikado 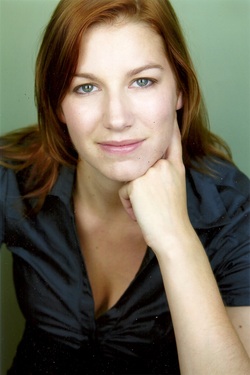 Brianne Tucker is thrilled to be a part of Life in the Raw and working with such a fantastic cast and crew.  A graduate of Randolph Academy for the Performing Arts, she has been performing across Canada as well as the United Kingdom.  Selected credits include The Duellist (Springwoks Festival), I Love You Forever... And More Munsch! (The Stirling Festival), Bluenose (Magnus Theatre), Murder in the First De-Glee!, Where There's a Will There's a Wake, The Sound of Murder (Eddie May Mysteries), and A Chorus Line (Bathurst Street Theatre).
Bri is a lover of old movies and can quote the entirety of The Court Jester - go ahead, test her!  An avid crafter, she has occasionally lost her husband under a mound of yarn.  Next on her schedule is a full-length presentation of Demanding Satisfaction's The Duellist, coming this fall.  She loves everything purple. 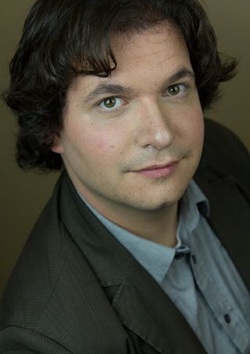 Scott Pietrangelo is truly a jack of all trades.  He graduated from the joint Theatre and Drama Studies Program at U of T and Sheridan College and received his advanced stage combat certification from Rapier Wit and Fight Directors Canada.  When he's not performing in piano bars and pubs around the GTA, he is also the music director of newchoir, Toronto's po/rock community choir.  Music directing credits include All Singing, All Dancing and Groovin' Thru the 60s at Port Hope's Capitol Theatre, as well as the upcoming Karaoke Dreamers at Bluewater Playhouse.  He's also been seen performing in A Christmas Carol (Rose Theatre Brampton), The Hobbit (Grand Theatre, Canadian Premiere) and Seussical (Silvermist Niagara).  Scott is thrilled to be joining this cast and ecstatic to be involved with the Toronto Fringe Festival for the first time. 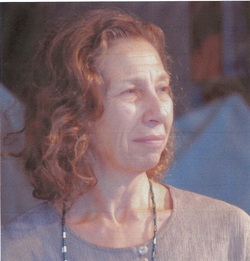 Shel Goldstein works as a Toronto-based actress featured in film, tv, stage, clown, radio, cabaret, and commercials.
She first worked with Barbara Larose under her direction in The Sisters Rosensweig.
Some other significant theatre: title role in Mother Courage and Her Children, Vancouver's Unidentified Human Remains & The True Nature of Love, Necessary Angel's Electra and BOOM!, TPM's Letters to the Editor.
Selected film credits: Mazursky's Enemies: A Love Story, Egoyan's Adoration, The Dream Team, Essence.
TV roles: Cagney and Lacey (pilot), The Newsroom, Kids in the Hall, Queer As Folk, Common Ground, Wind at my Back
Although this is Shel's first Stage Management gig at the Fringe, she has starred in 2 previous Fringe productions, Les Mers Rouge, and Through the Tulips. 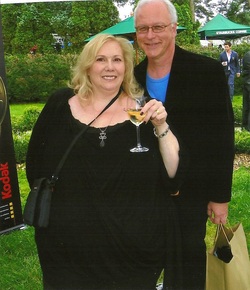 Thick and Thin was created as a family project by the husband and wife team of Barbara Larose (artistic director) and Rick Jones (writer/composer) for the production of new Canadian theatre works.  Life in the Raw marks their first attempt at co-writing a show.  Previous productions include Wild Moose Chase (Alumnae Theatre) and critically acclaimed (NNNN) Millennium Madness Sale!, which appeared in the 1999 Toronto Fringe Theatre Festival.
Barbara and Rick have also worked together as director/writer, director/actor, or director/sound designer on numerous projects for the Alumnae Theatre Company in Toronto, proving that the family that plays together, stays together.